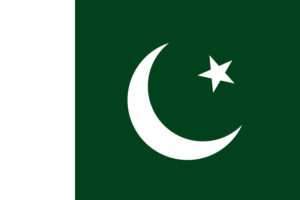 Pakistan Zindabad (Urdu: پاکستان زِنده باد‎ — Pākistān Zindah bād, Urdu pronunciation: [ˌpaːkɪsˈt̪aːn ˈzɪnˌd̪aːˈbaːd̪]; lit. ‘Long Live the Pure Land‘ meaning, “Victory to Pakistan” is a slogan used by Pakistanis as an expression of victory or patriotism, often used in political speeches.[1][2] Its use started even before the creation of Pakistan, during the later phase of the Pakistan Movement.[3] The slogan became a battle cry and greeting for the Muslim League, which was struggling for an independent country for the Muslims of South Asia, when World War II ended and the independence movement geared up.[4] During the partition the slogan was shouted when trains transporting Muslims entered Pakistan.[5] Pakistan Zindabad is the national slogan of Pakistan.